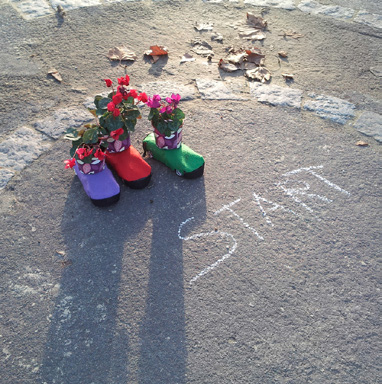 This three-week project investigated the environmental policy of London Olympics 2012 and especially the destiny of the trees, which were cut down for the site construction works. It was part of a bigger project “Moving Forest” devised by Shu Lea Cheang in 2011/2012 in London.

To make the trees run a marathon back to their roots, to their origin, I constructed a scaled-down prototype with flower pots attached to hacked remote control cars. Participants were supposed to control the movements with their breath. Thus I aimed to establish an intimate relationship between trees and participants, as breathing is an essential mechanism for both humans and plants.

Working on the technical and social parts of the project in parallel, I tested the concept in several places in public (at Borough market and a play-ground in North London). While testing the project with three remote controlled cars, I discovered that they all work with the same frequency. Thus, operating one control participants could move all the cars at once, which made an interesting twist in the whole idea of a competitive marathon. The social methodologies of this project enabled me to establish a dialogue concerning the London Olympics 2012 with all its gentrification and environmental issues. This strategy also gained me some valuable feedback at the early stage of production.