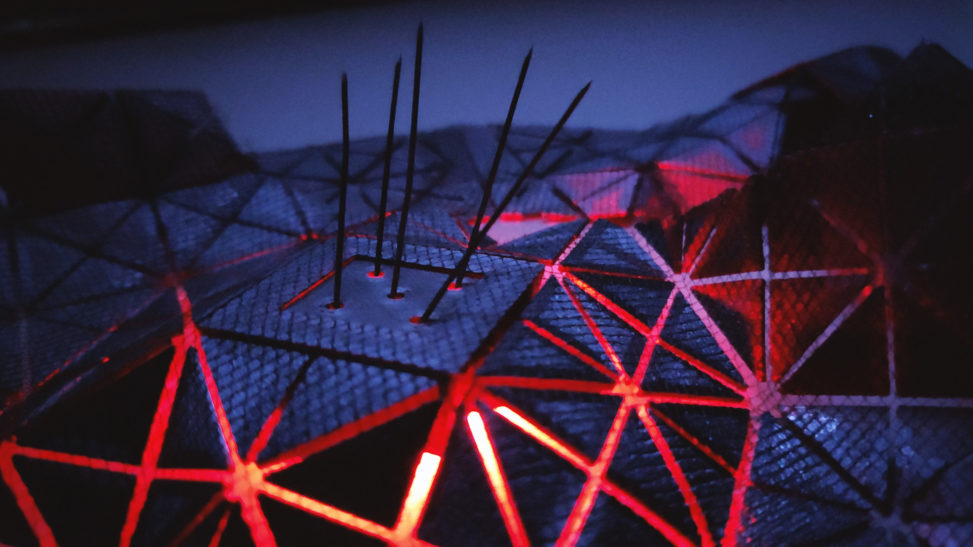 In this seminar 2nd year BA-students were introduced to the basics of electronic textiles, including crafting and coding hand-made wearable sensors. We then explored and fantasised about possible futures and pasts, applying methodologies of Speculative and Critical Design. Students speculated about alternative techno-rituals whilst creating wearable prototypes as artefacts of reversed archaeology for fictional societies.

Data Rat Tale by Mathhias Sirch, Michael Wagner and Dorian Spiegelhauer: The projects deals with issues around data privacy and surveillance in our modern society. The (audio-)data collected from the wearer of this device is immediatly interpreted by the automatic voice recognition software and printed out, forming a data rat tale.

KarmaWATCH by Annika Kreuzer, Andrea Hecht and Fabian Schindler: What if there was no more money as a material medium of exchange? What if social actions and responsibility were rewarded? This project explores the concept of earning money through socially responsible behaviour, rewarding the wearer with karma points. After each good deed the points are transferred via touch of the copper tattoo on each wearer’s hand.

Algorithmic Ritual by Mathhias Sirch, Michael Wagner and Dorian Spiegelhauer: A necklase for parasitic body control through a divine AI – a society where AI is trusted to make the absolutely right decisions. People are willing to be guided through “higher forces”, and the connection to the nervous system is established through the pins pushed into the spine. 3D-printed scales on net fabric, LED, pins.

Æsir – Gods or just people? by Lucas Falkowsky and Luis Bauer: this project reinterprets germanic mythology by uncovering scientific explanations behind devine superpower. The only artefact supporting this theory, however, is the recently uncovered high-power-belt of Thor. It is assumed that it enabled him to produce lightning bolts by acting as a power bank and providing electric charge to his hammer. The reason he could survive this procedure is attributed to his wearing of isolating gloves.

PLUMO by Angelika Sorokina, Vincent Frank, Jennifer Warbeck und Premwat Toworntarn: Plumo is a personal language assistant designed for children, which pretends to be your best friend while simmultaneously spying on you and sending your personal data to a big corporation.